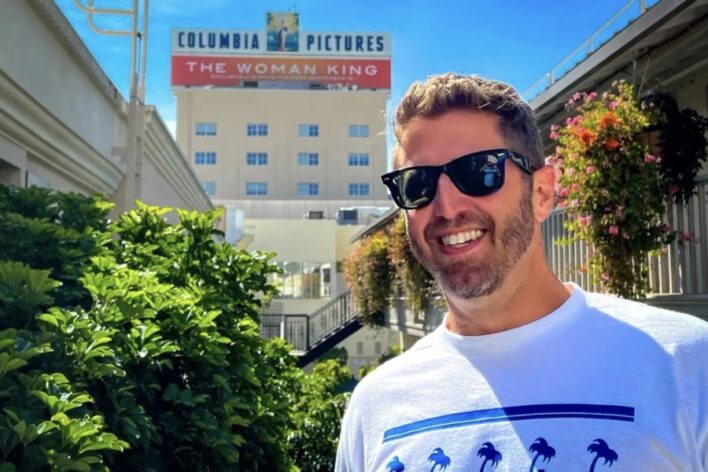 Forty-four-year- old Evan Lovett is the creator and genius mind behind L.A. in a Minute, one of L.A.s fastest growing social media vlogs on record.

As our charismatic guide to everything Los Angeles, Lovett uncovers the not so well known facts behind our most beloved landmarks, personalities and change makers.

Each day on his social media channels, Lovett lays it out on the line with a take no breath, take no prisoners delivery to remind us all why we love LA.

But what makes Lovett’s delivery of facts so darn lovable to the masses? As Evan Lovett would say, “Let’s Get Into It!”

Lovett, who told Downtown Weekly his inspiration comes from his son, his parents, his wife, and his city could just be the perfect mashup of traditional news person and social media icon. His style matches the tone and timing of the city, making him relatable like the more successful vloggers, coupled with his past courses in journalism coming out of UCLA and going on to work at the L.A. Times.

Ever wonder about the origins of Bob’s Big Boy or Downtown’s own San Pedro Fish Market?

When passing along the road do you think to yourself, hey, what’s up with that dusty-old giant donut?

Probably not, and that’s the key. Lovett invites us to rediscover the everyday stories we take for granted while offering an elevated history lesson in human ingenuity.

Lovett’s words dominate your attention span with messianic vocals left raspy from his convictions, pounding out the hard-hitting truths establishing authority and a level of trust.

His speech pattern and timing tempt us to unite through the experiences we’ve all shared throughout our lifetimes. His highest-reaching posts about Mosquitoes, In-N-Out, 405 Freeway, How we get our Water, and King Taco have peaked over 100k.

Simply put, the Studio City native provides us with the history lesson we never knew we needed, pooling together the familiar sights and people of LA that tie us all together as Angelenos. From childhood memories to new discoveries, it’s all there. But, don’t blink or scroll, you’ll only have a minute to soak in as many fun facts as you can.

Facts, facts and nothing but the facts!

While some vloggers exhaust time and budgets traveling and twirling around with camera angles and wardrobes, Lovett mainly props his upper torso in front of a green screen or shows up on location and lets us have it. The good, the bad and the grit!

“I’m just a guy with genuine passion & relentless curiosity that loves sharing my joy for our amazing city.”

Well, there are those moments when followers will add to his commentary with facts of their own. Others make it a habit to challenge Lovett’s facts. Most express admiration for what he presents in the form of hundreds of comments each day.

It all makes for delightful moments of engagement and ensures Lovett’s long-term success. That, and the fact he presents L.A. in a positive light after tireless research & fact-checking bringing his followers awesome tidbits, facts, & history.

Remarkably, Evan has only been the face of LA for 9 months. Lovett’s first post on Instagram began with a quick editorial about the Northridge Earthquake. Since, L.A. in a Minute has gone on to showcase everyone from Snoop Dogg to Tommy’s Burger, shining a historic flashlight on the memories of the people and places who have touched our lives.

When speaking about DTLA, Lovett stated,

“I love it. I grew up as DTLA was undergoing its renaissance at the turn of the century and have enjoyed seeing the development as well as embracing its past.”

DTLA can hardly wait to watch Lovett’s take on our historic people and places…. And …This has been LA in a Minute …in a Minute. https://linktr.ee/lainaminute