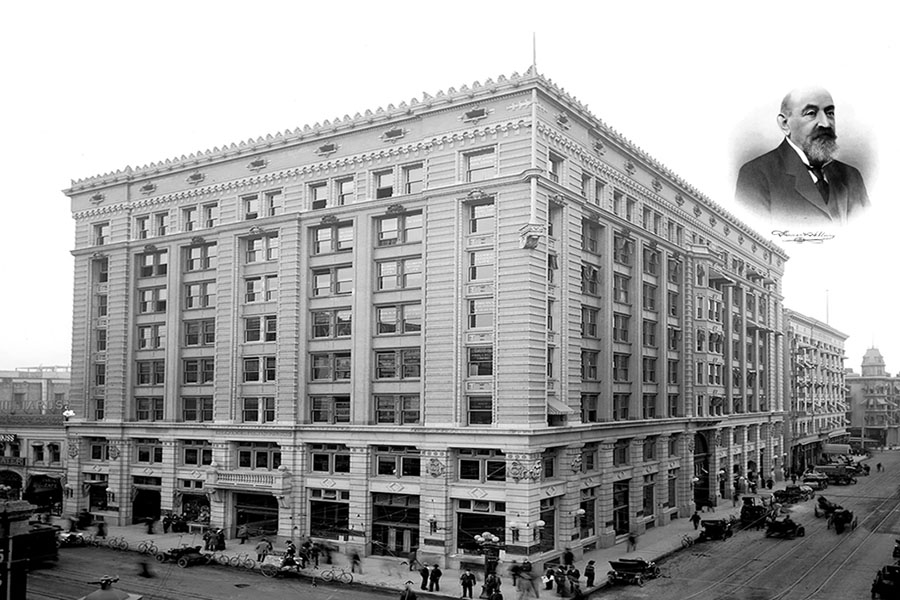 The story of the HWH Building begins back in the days when much of Los Angeles was still developing.

The industrial revolution and brand new railroad enhanced expectations of a new prosperous life in Los Angeles from across the globe.

Those were the days when immigrants hitched rides upon steamships on long journeys with tight quarters.

Such was the case of Herman Wolf Hellman and his older Brother Isaias.

In 1859, the sun above LA exposed a land of opportunity as far the eye can see. Rules were simple. Start small, build wealth, make enough money in investments and live the luxurious life you deserve. In other words, make a name for yourself.

The Hellman brothers did just that.

At just sixteen, Herman Wolf Hellman took a job at his cousin’s grocery store, later partnering with Abraham and Jacob Haas, Hellman, Haas & Co., a store destined to become one of LAs most successful wholesale businesses, which is now known as Smart & Final.

The Hellman brother’s serendipitous path led them both into the world of banking. Over the course of their lifespans, the two would prove to be highly influential in laying the foundations of some of the most revered institutions in Los Angeles.

Before their 50th birthdays, the brothers had established the Farmer’s & Merchant Bank, the Merchant’s National Bank of the West and The Security Savings Bank, known today as Wells Fargo.

They also helped erect The University Of South California, started the first LA Chamber of Commerce, and raised hundreds of thousands of dollars to ensure Union Station’s construction to establish train stops and commerce opportunities from our country’s then newly forming railroad system.

These endeavors would allow them the title of “Wealthiest family west of the Mississippi.”

The two brothers had a falling out when a relative of one of their wives was caught embezzling money. This led to an estrangement and fierce rivalry between the two that would last the remainder of their lives. Isaias upon hearing news of his brother’s failing health, gave one last attempt to say good bye to his brother and leave the past behind, however, when he finally arrived from San Francisco, he found his brother had passed away the day before.

Herman was determined his brother would not have the better building.

There are a few buildings in the Old Bank District named Hellman due to their feud.

In their angst, the two brothers began construction on three separate buildings at once. Isaias would construct the Hellman Building on 4th & Main and tear down his home to construct the neighborhing the Farmers & Merchants Bank (1905), reminiscent of a Roman temple, while Herman Wolf would tear down his very own home, a block away on 4th and Spring, to build what the LA Times reported was “the biggest building in Los Angeles”.

In its day, HWH was a modern marvel. Visually stunning, with its row of fang faring wolf head sculptures, hardwood floors, heavy mahogany doors, dual marble staircase, and Tiffany-stand glass oval dome, it was also the first of its kind to offer a steal frame the likes LA had never seen, leading the way to how buildings would be constructed to this day.

Today, it has reopened as luxury apartments fully restored to its original glory, once again taking its place as a modern-day masterpiece, now known as HWH Luxury Living, one of the best apartment high-rise buildings in Los Angeles.