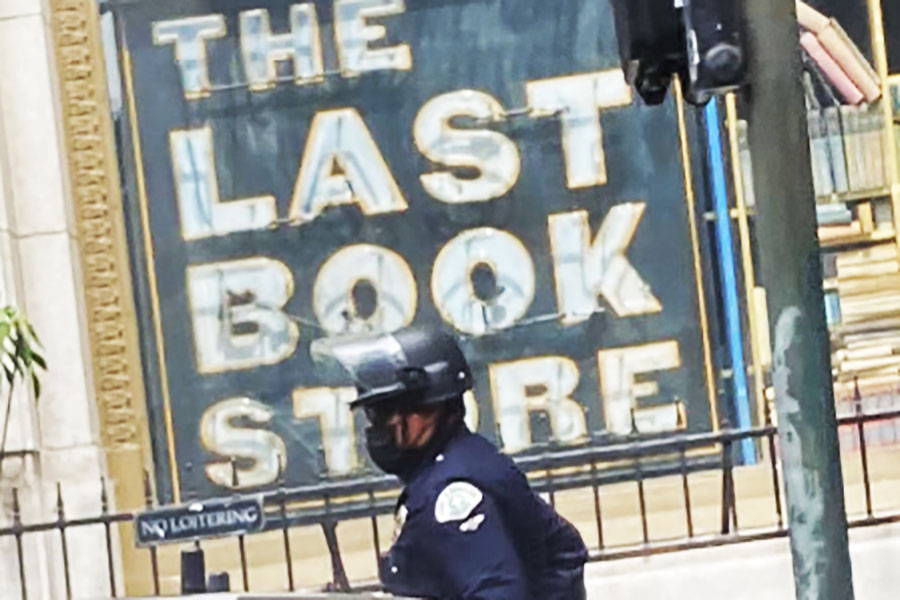 Longtime DTLA residents will testify, when it comes to protesting on our city streets, this isn’t our first rodeo. It seems every ten years or so; there’s a protest that ends in a riot in our neighborhood. And sadly, these riots seem to be escalating in intensity.

Numerous times a year, crowds in the tens of thousands gather for change, while marching and sometimes celebrating along predetermined routes in line with our country’s first amendment constitutional right.

The Women’s March, May Day, Teacher’s Strike, you name it! For lawmakers, families, and people who aren’t trained in hand to hand combat, that means a chance to come together and vent publicly in a “peaceful assembly.”

However, “unlawfully assembled protestors” beware! Local law enforcement has a history of meeting you head-on, which often includes skirmish lines, riot gear, tear gas and rubber bullets. They are there to make sure protestors follow all the rules and they are pretty stubborn about it. One wrong move and you can easily become an “unlawful assembly member,” you just need one police vote to win.

Back In the 80s, DTLA offered a raging outdoor punk party complete with mosh pits, Mohawks and our favorite live punk bands. “The DTLA Street Scene” was a hit, bringing in thousands of young punks from across the land. (What could go wrong?)

In the summer of 1986, during its 8th Annual, the New York-based band, the Ramones decided they weren’t going to show which angered the fans and put the surrounding police forces on high alert.

No one knows who threw the first bottle, but it landed on a policeman, and the rest is punk rock history. Just like the once-thriving DTLA Punk scene, DTLA Street Scene is GONE with the past.

In the weeks before, countless numbers had watched a group of police officers unleash hell’s fury upon Rodney King. King was an unarmed black man who led police on a high-speed chase only to take on a barrage of baton hits and kicks at the hands of the white officers in a video broadcast on live tv.

SurvivingDTLA – Don’t Be a Racist!!!

In 1992, fires erupted from Downtown to South Central in response to a not guilty verdict in the case of the police beating of Rodney King.

After the verdict, a battered-looking King took to the press podium with his most famous words, “Can’t we all just get along?” to help to extinguish the City’s emotional flames.

But it was too late. Angry protests had already turned into riots leading to martial law, mass incarcerations, deaths, and assaults on the innocent. Arson and looting spread across LA and sparked the ever-growing genre of online police brutality videos that would continue to “collect hits” for the next 28 years.

When they aren’t racially motivated, at their worst, DTLA protests consist of traffic jams, and maybe an extra coat or two of graffiti or sometimes chalk.

But don’t let your guard down!
Whenever there’s a massive crowd of people (no matter how happily art imitating life may seem), there is always a potential risk involved. Because of a “few bad apples,” protests and areas where masses of people gather should still be considered highly volatile.

In late summer of 2012, a group from the “Occupy Movement” who had been camping out on the lawns of City Hall, thought it would be advantageous to pass out chalk in a contrived effort to get the art walkers “ to practice their right of free speech.” That turned out to be the worse creative idea for the Downtown ArtWalk ever.

The relatively peaceful event which hosted up to 50,000 in its heyday, soon found itself amid a full-blown riot. Arrests, flash grenades, rubber bullets and gallery lockdowns after police demanded art walkers and uninvited Occupy protestors to stop writing peaceful (and not so peaceful) messages in chalk on the buildings of the Historic Core was the result.

Artists and art walk patrons alike soon found themselves locked inside of galleries for hours on end. Others who refused or those that couldn’t, (including street artists with hours of break downtime), were subjected to rubber bullets, tear gas and billy clubs.

On the morning after, Historic BID clean up crews were forced to use jet streams and elbow grease to scrub the chalk off the buildings and that which covered the ground from Pershing Square to the Fashion District. Despite the embarrassment of having arrested mostly chalk artists and a fist full of Occupy activists, police spokespersons would say they were initially provoked by protesters who threw bottles, into a state of tactical alert.

The Collateral damage – the end for the Downtown Art Walk as we knew it, which was already suffering from the pain of the accidental death of an infant the previous year. RIP Baby Alejandro. #artwalkbaby #artwalkriots

Okay, so you moved Downtown and genuinely enjoy our urban way of life. You’re already well used to being inundated by our numerous homeless encounters.

You’ve had more than your fair share of incoherent conversations with our steady flow of intoxicated weekend warriors. Hopefully, you know how to cut communications short, walk a bit faster, or cut across the road when unfavorable situations arise.

You enjoy the peace of our theaters, shopping and relish in our free outdoor concert series. Perhaps you’ve even stayed long enough to learn how to avoid rush hour traffic, chart the direction of our one ways or ride in the new bike lanes to save time, gas and the environment.

You’re prepared for everything except for maybe, a full-blown riot.

And Not only one night but several complete with full of explosions, helicopters, sirens, and pure blown chaos.

If you have small children or pets, be sure to console them, hold them tightly. The noise will not end before dawn. Earplugs and stiff drinks are strongly recommended for those who wish to sleep soundly.

However, if you live above a convenience store or one of the many local businesses being ransacked at ground level, you’re probably scared to death your building may be set on fire.

SurviveDTLA – Have your escape route and personal fire extinguishers ready!

You’ll find your fabric COVID mask will do little to help with the toxic fumes or tear gas. Instead, they will do just the opposite.

Stay calm! DTLA is surrounded by fire stations, and with the streets empty thanks to the nightly militarized curfew, you will have chances to survive.

SurviveDTLA – Stay insured!
For the most part, the combination of graffiti, arson and looting of DTLA brick and mortars as a result of a protest turn riot is pretty rare here in DTLA.

For the businesses being affected, we suggest not only boarding up storefronts but adding looting insurance to any insurance specifically. Spring Street MAC went as far as parking a van in front of their storefront after it was looted, on the first night of rioting.

SurviveDTLA – Watch out for antagonizers!

You’ve seen these guys. They’re usually dressed in all black from head to toe and there’s little way to identify them. For some reason, they’re out to escalate the situation and know just how to turn a productive day of cadence, parading and creative cardboard sign projects into to a full-scale shit show. When you see them, expect tear gas to soon follow.

The police have eyes in the sky. And ears everywhere. Police helicopters can see the crowds and individuals and convey their whereabouts to their officers on the ground.

Although they may look like they are standing around practicing patience at their lines of scrimmage, they most likely are awaiting orders and diverting crowds to flow their way.

Remember, mass protests on our city streets usually take place without incident. However, depending on the number of unforeseen factors, there is always the potential for a peaceful protest to turn into a full-blown riot.

The best way to avoid being tear-gassed, arrested or worse is to obey the curfews and rules of lawful assembly is just to stay inside. Be safe. SurviveDTLA. [/ihc-hide-content]