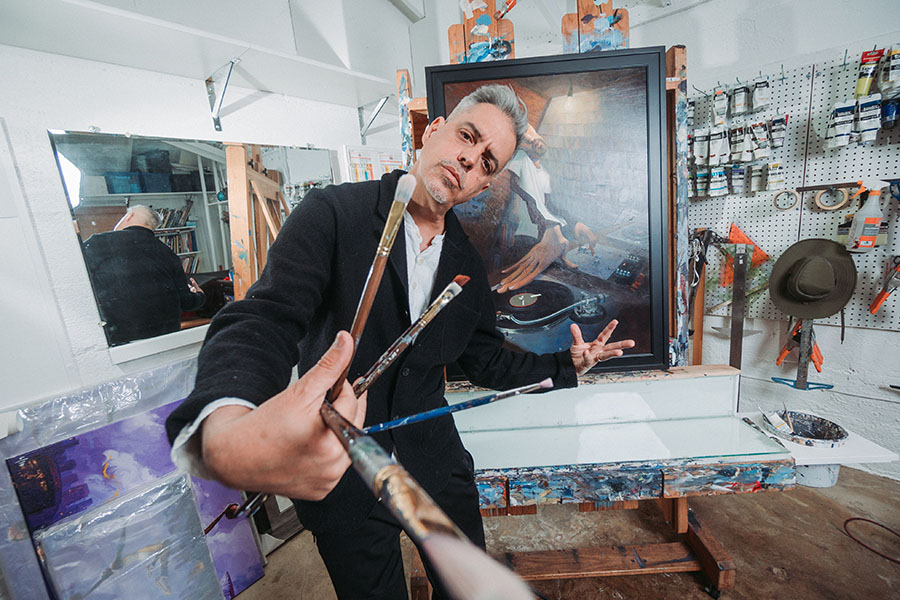 It’s not everyday one gets to drink coffee and chill with one of the world’s most popular contemporary artists, but that is in part what Downtown Weekly has set out to do.

Not only interview the most influential and highly revered artists of our generation, but to share their space over the course of a few days, to see just what makes them tick. Artists in Residence 2020 presented by Kevani Inc. is now in full effect.

This month, we were lucky enough to nab an interview with artist, author, motivational speaker, and charismatic art critic – legendary artist, Justin BUA.

Yes, the same world famous artist Justin BUA who taught figure drawing at USC for a decade and the same guy who later went on to write the idea and vote for a Bruce Lee stamp while on the US Stamp Committee; The same Justin BUA who has sold more prints than any other artist on planet earth! The first artist to ever paint the narratives of Hip-Hop. And today, the same BUA who is becoming just as well known for his commercial work as he is for his very entertaining and sometimes cynical art history vlogs upon which he posts daily on social media.

He is the Justin BUA and this is his story as told at Cafe Demitasse in Little Tokyo on the morning of March 4, 2020.

As soon as we announce who we are for the record, a woman sitting at the same table across from us catches his name. The effect of her coffee is instantly magnified, “You’re Justin BUA?”, she says with a surprise.

We spark a small 3-way conversation (as we record) about her own collection, the artists who inspired BUA and the artists the two mutually admire; Salvador Dali, Frida Kahlo and a short list of others. She promises her next piece will be a signed limited edition BUA print, then it’s back to our two-way interview as she scurries off to work.

BUA, of Puerto Rican and Jewish descent, we find out, is from Harlem, New York. Not only from NY but from a time in New York that spawned B-Boys, poppers, breakers, Graff writers and the earliest stages of Hip-Hop music – a.k.a. Old School.

And timing is everything. BUA is spawned from the age of Hip-Hop when Hip-Hop was Hip-Hop – still relatively positive, underground and newly emerging. A time when producing graffiti art on the city’s walls and transportation systems was surely the most daring.

This was the time of a raw, young BUA, notably gifted, who had long been receiving accolades in grade school, which ultimately led to a scholarship across the country to study at Pasadena’s Art Center College of Design at age 20.

BUA jokes about how the school housed him in a dorm with the only other Puerto Rican student who hadn’t yet mastered English; citing the obvious ignorance of the times. BUA turns to a more serious page of his college education – a time that pit student against student in a rigorous, overly competitive program taught at one of the most renowned art schools in the world by some of the most brilliant art professors that valued draftsmanship over creativity. BUA sharpened iron with iron.

“It [Art Center] was good because it developed my killer instinct – some people have it and some people don’t. I did and I definitely refined it at Art Center.”

The Art of an Age.

BUA shares that his first paying gigs began with artwork on skateboards, CD album covers, and on apparel. Growing in popularity, he was pulled into the vortex of mainstream-commercial art by an A-List of who’s who in advertising. Eventually BUA was able to make his art into posters of work that were reflective of his life experiences.

“I could be me. I started painting people from the hood – people I grew up around. My culture. People of color – and at that time, no one was doing that.”

Those looking for visual concepts best suited for major brands and celebrities in the entertainment world sought BUA to capture the attention of an ever growing urban market.

BUA’s list included the likes of MTV, EA Sports, Microsoft, Comedy Central, Oxygen, Toyota, and so on, and continued into the here and now, with his upcoming album cover with singer-songwriter Ne-Yo and a full list of newly commissioned works for major VIP clients.

However, with such a massive list of lifetime achievements BUA brings up the limited time we all have here on earth. Yet, at the same time he’s speaking of his own mortality he seems to miss the obvious – That he himself will, undoubtedly, when the time comes be listed and revered as one of the world’s greats. No different in legendary status then the artists who came before him, together, because of their works, living on for generations to come.

The Art of Immortality

To pinpoint an understanding of the work of BUA in the time space continuum one may wish to distinguish between the points upon which it exist.

In one space some may want to pin BUA as a graffiti artist who works with oils and acrylics on canvas instead of the obvious – spray paint on concrete. What other style would dare showcase a world so drenched in urban culture? Right? Wrong.

At another point. Because of his many paintings of iconic figures, some may even try to reduce him to a caricature artist with a signature style. Right? Wrong.

BUA’s pieces find their place inside the distorted realty of a culture that didn’t always have value or intelligence. Yet, this realm did exist and very much reflected the realities of an unfamiliar urban America. The initiated musician, the Breakdancer, the innovative jazz player, the solitary baller; those playing without boundaries or outside the confinements of what was considered normal are perhaps the reason why they have been portrayed in such a way by the artist.

Look twice and think again. BUA’s paintings may just embody all that is unfamiliar, yet that which is forced upon his subjects by the effects of their existence.

The DJ, for example, (selling over 13 million copies) shows a young man alone, in his basement studio with racks of records to his left, graffiti laden bricks behind him, mixing to dim lights that accentuate his arms – extended, perhaps even made jagged by the erratic movements from each scratch he makes. Could this be what happens when reality mirrors surrealism instead of the vice versa?

The Here and Now

“When it comes down to it – I could just be painting. Because that’s what makes me tick. And that’s what the people want.”

Currently, BUA is painting a commissioned Hector Levoe and Frida Kali!! Not KAHLO, but “KALI”. A rendition of Frida Kahlo with four arms and one the hands gripping the head of husband, Diego Rivera dripping blood over a collection bowl held in another.

BUA is a master creator.

Embodying the conceptional wisdom of light logic, value, color, and design. Add the fact that BUA is ambidextrous and draws with both hands simultaneously. BUA’s name and body of work will undoubtedly be immortalized into the canon of art history for centuries to come.