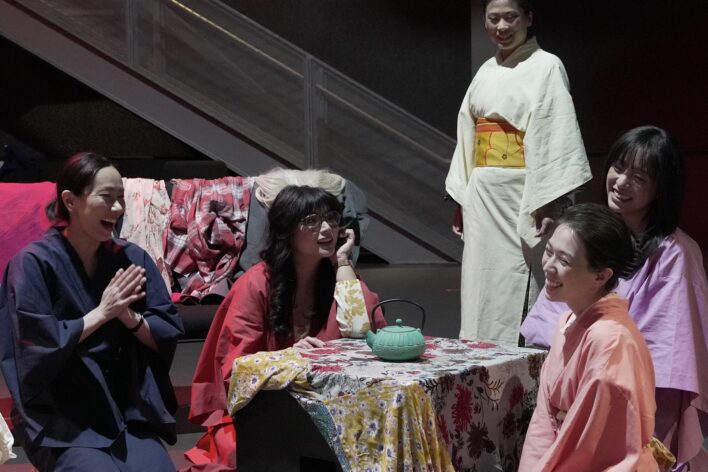 Hero Theatre invites audiences to envision and experience America as they do while examining classical and contemporary works, ensuring that equity, diversity and inclusion remain at the forefront.

THIS MONTH, Hero Theater presents a revival of Tea, Velina Hasu Houston’s powerful, lyrical exploration of the immigrant experience that has become a modern classic in its nearly four-decade history of production. Hero Theatre resident director Rebecca Wear helms a fully double-cast company for a Saturday, April 23, opening at the Rosenthal Theatre at Downtown L.A.’s Inner-City Arts, where performances will continue through May 15.

Two all Asian female ensembles tell the story of five Japanese immigrants in this deeply moving, yet humorous and surprising play that illuminates a little-known chapter in American history.

The two companies include Elaine Ackles, Olivia Cordell, Hiroko Imai, Tomoko Karina and Hua Lee, and Yukari Black, Alix Yumi Cho, Ariel Kayoko Labasan, Sayaka Miyatani and Bolor Saruul. Imai and Black share the role of kindly Setsuko Banks, whose African American husband recently passed away. Lee and Saruul double as snooty Atsuko Yamamoto, who feels she is “above” the others because her husband is Japanese American. Ackles and Labasan portray the assimilated Chizuye Juarez, who loves coffee and is known as “Chiz” to her friends (much to the chagrin of Atsuko, who thinks the nickname sounds like “Cheese”). Cordell and Cho play Teruko MacKernzie, married to a White man. And Tomoko Karina and Sayaka Miyatani take on the role of tragic Himiko Hamilton.

Tea is rooted in Houston’s own experiences growing up in Kansas as the daughter of a Japanese mother and half African American/half Native American father who met during the American occupation of Japan.

“I am honored to be a daughter of a Japanese woman who sacrificed so much so that her children could be of two nations in the deepest, most profound ways,” wrote Houston in a blog post. “It is a legacy that, all my life, I have striven to live up to and to pass on to my children.”

Performances of Tea take place at 720 Kohler Street at the Rosenthal Theater of Inner City Arts in Downtown L.A. (just south of the Arts District).
@innercityarts