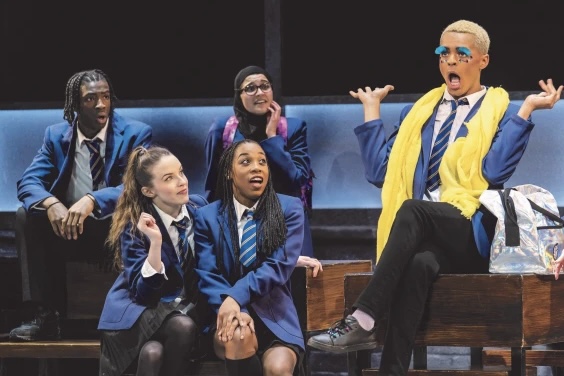 “Everybody is Talking About Jamie” since the award winning musical  premiered January 21st at The Ahmanson Theatre in downtown Los Angeles.

The story centers around an extraordinary mother and son relationship that celebrate acceptance, belonging, the power of unconditional love of a mother for her child.

How good life is when everybody is the best they can be?

Jamie New (played by Williams) is sixteen and lives in public housing in Sheffield, England. Jamie doesn’t quite fit in, he’s terrified about the future and he’s going to be a sensation. Supported by his loving mum (played Jacques); inspired by local legend Hugo and his alter ego Loco Chanelle (played by Haylock); and surrounded by his friends, Jamie overcomes prejudice, beats the bullies and steps out of the darkness, into the spotlight.

Based on a true story….

Director Jonathan Butterell saw the Firecracker documentary film “Jamie: Drag Queen at 16” the true story of Jamie Campbell and his mother, Margaret. This inspired him to create this musical which is a dramatized portrayal of a period in Jamie’s life but is not a faithful account. Certain events and characters have been fictionalized.

With a production this socially conscious yet fantastically funny at the same time, everyone is still and will be talking about Jaime for quite some time..