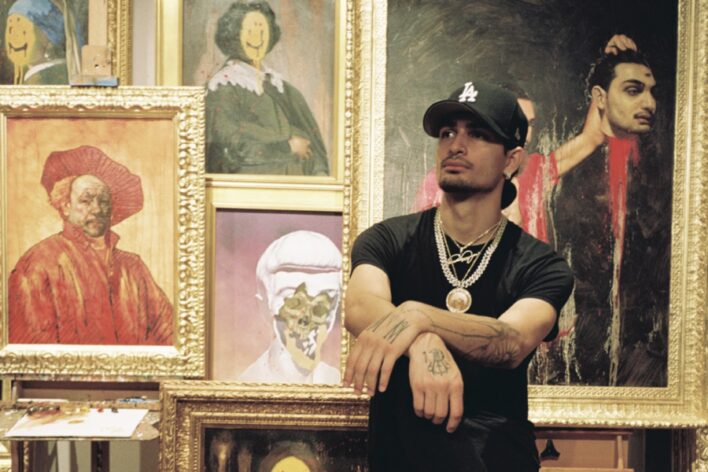 Isaac Pelayo exploded through the art scene back in 2020, displaying mesmerizing works and his signature third eye that quickly became a staple in his career. Pelayo has since taken a new approach to his work which he will be debuting at his fourth solo show, THE NEW RENAISSANCE, Saturday September 17th.

Just like so many others, the economic pressure caused early in the pandemic lead to both Isaac and his father being furloughed as animators with Disney Studios. The news wasn’t easy for him and his family, but he didn’t let that stop him. Pelayo got into tattooing, modeling, acting, designing, produced music and somehow found the time to produce a studio full of paintings that would take hours, if not a whole day to go through.

His paintings illustrate a map of Isaac’s strongest emotions over the last two years which tell a tale of hardship, heartbreak, rebirth, strength, and all else that encompasses Isaacs story. “Painting is like breathing for me, if I’m not painting, I’m not breathing,” Isaac mused as he looked at his studio.

After two years of building his studio, in January 2022 Pelayo needed a break from his work and took an impromptu trip to Europe with his best friend where they got to go backpacking, ate well, and finally got to see with his own eyes, the artwork that had been most influential to him since his early childhood.

“Italian Renaissance and Baroque period art was the work that struck me the most. So having learned about these paintings from reading books and only seeing them in videos or pictures didn’t give any of them justice… but to finally see them in person just floored me. This experience I’m now describing was my ego death because everything I felt about my work after that just completely diminished.” Pelayo continued a little lost in the lingering feelings of his revelation, “Up until then I felt I belonged amongst certain artist and status, but that disappeared when I came back. The status and people I was around didn’t matter anymore, it was just about creating timeless art. Look at the Mona Lisa, she’s survived 500 years and still she provokes emotions like no other. That’s what I want with my work, to create timeless art.”

After his month trip to Europe, Isaac immediately got to work picking up the brush to memorialize the feelings he brought back with him for the world to see. He recreated Caravaggio’s classic David with the Head of Goliath as a self-portrait, depicting himself as both David and Goliath. The powerful image is a symbol of the artist’s profound transformation that had taken root in him. The only way to nurture it was to stop trying to slay the Giants around him and face the one in him.

“I always felt like I was sort of in a dream state with my head in the clouds and I had this “perfect image,” of myself. That’s what my paintings are about,” Isaac said looking at Pray for Paris, the first painting he created in the Street Baroque Series “the very tight rendered parts of the painting represent the parts of me that are very detailed, poetic, and caring. The messy parts are the defiant side of me, the side that doesn’t want to care about anything so that I can unleash the beast within. The world is imperfect, chaotic and messy, but there’s a beauty to the mess we fail to see far too often,” Isaac noted finally looking away from the painting seeming proud.

On September 17th, between 7pm-10pm, at 1443 W. Jefferson Blvd, Los Angeles CAIsaac Pelyao is launching The New Renaissance Solo Show headlining his Street Baroque Series to showcase the imperfections in life, culture, and himself so that we can come to appreciate it all as a whole; both the good and the neglected bad.

Isaac’s new body of work is described as a combination of classical art, street art, pop culture and a bit of contemporary. He’s even come to adopt a new signature, a dripping three-eyed, yellow smiling face.

“It was a subconscious way of saying I always have a smile on my face,” Isaac said reflecting on when he first created the series, “but underneath all that is something more chaotic. It’s the juxtaposition of tight-rendered work and realism with dream-state reality that’s very angry on the inside,” This he explains what his work has come to mean to him.

Don’t miss his show and see what his work could mean for you too. https://www.isaacpelayo.com