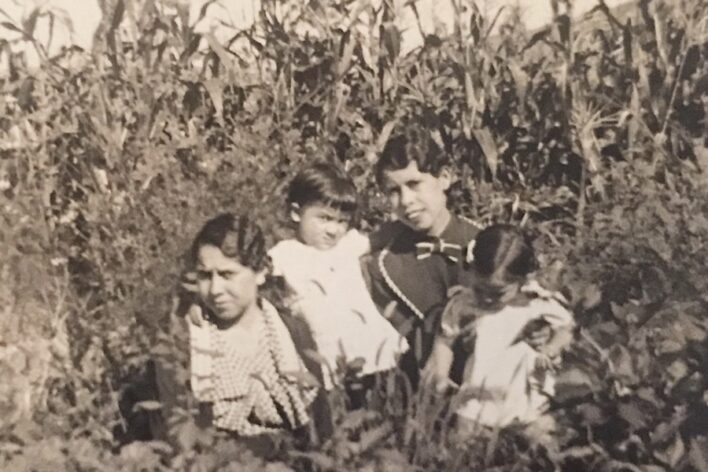 Latino Theater Company partners with Native Voices at the Autry to present a haunting and lyrical rumination on identity, family and colonialism over generations with Lily Rushing’s Desert Stories for Lost Girls, directed by Sylvia Cervantes Blush.

When 18-year-old Carrie moves in with her grandmother, she is thrown into a world of memory and mystery that unearths her family’s Genízaroidentity — shining a light on a dark, bloody and little-known period in the history of the American Southwest.

Beginning in the early 1600s, Spanish colonists sought to “reeducate” (some say “detribalize”) the Native people of the Southwest. Funded by the Spanish Crown, the Spanish first abducted and then later purchased war captives from surrounding tribes, including Apache, Comanche, Kiowa, Navajo, Pawnee and Ute.

The colonists took these individuals to their households, where they were taught Spanish and converted to Catholicism. They were forced to work as household servants, tend fields, herd livestock, and serve as frontier militia to protect Spanish settlements. Many endured physical abuse, including sexual assault.

The Spanish called these captives and their children “Genízaro” (heˈnēsǝrō). Today, Genízaroscomprise as much as one-third of the population of New Mexico and southern Colorado.

“I was in college when my mother found an old census and I took a deep dive into researching my Genízaro identity,” says Rushing, who hails from Sacramento and began developing the play as an undergraduate at DePaul University. “The characters in the play are all based on my ancestors. Placida, my great-great grandmother was sold into slavery as a child; she had my great grandfather when she was only 11 or 13 years old. My grandparents, Rosa and Joe, moved to California to escape sharecropping. But the other half of my family is still in New Mexico.”

In the play, each time Carrie and Rosa touch an object that links Rosa to her past, they are launched into her memories, bringing Carrie closer to understanding the truth of her heritage.

“What excites me about Desert Stories is that it touches on very dark subject matter in a poetic way that lends itself for highly theatrical staging,” says Blush. “It challenges us to let go of our expectation for a safe narrative. It invites us to lean into the words and visual storytelling to have an experience.”

Desert Stories for Lost Girls was developed at DePaul University and in the Indigenous Circles collaboration between Native Voices and PlayPenn.

“We are thrilled to be collaborating on our first co-production, as this partnership exemplifies community and is a powerful example of the way American theater could and should be,” said Latino Theater Company artistic director José Luis Valenzuela and Native Voices artistic director DeLanna Studi in a joint statement.

Lily Rushing is a playwright and artist from Sacramento, CA. She is the 2018 recipient of The Playwriting Initiative award at Interrobang Theatre Project, where she wrote Cowboy Play. In 2020 Cowboy Play was part of the Read, Rant, and Relate Series by Relative Theatrics. She received her B.F.A in playwriting from the Theatre School at DePaul University.

Native Voices at the Autry is the country’s only Actors’ Equity theater company devoted exclusively to developing and producing new works for the stage by Native American, Alaska Native, Native Hawaiian and First Nations playwrights. The company has been hailed by critics as “a virtual Who’s Who of American Indian theater artists,” “a hotbed for contemporary Native theater,” “deeply compelling” and “a powerful and eloquent voice.” Founded in 1994 by Randy Reinholz (Choctaw) and Jean Bruce Scott, Native Voices is now helmed by artistic director DeLanna Studi (Cherokee) and managing director Elisa Blandford. It has been the resident theater company at the Autry Museum since 1999.