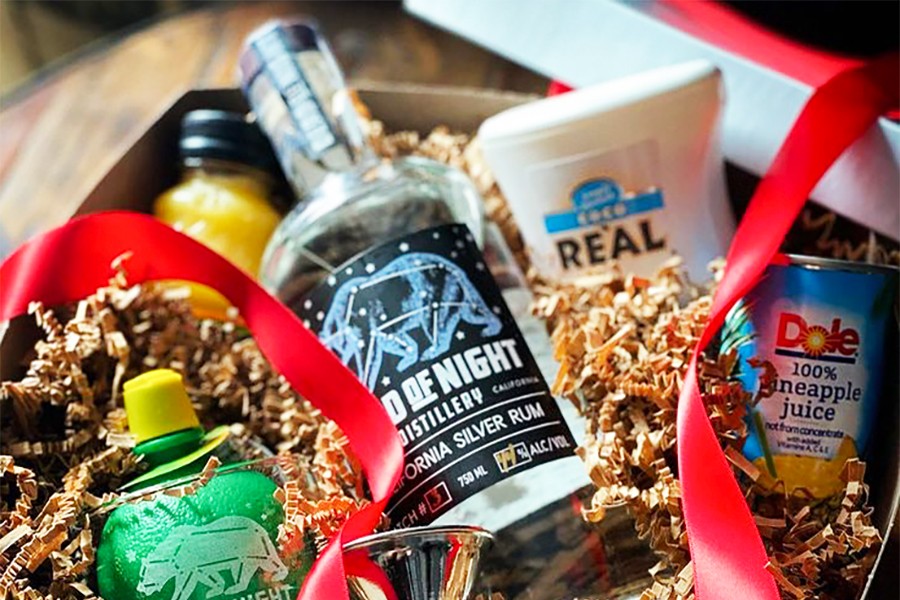 Reading the creation story of Dead of Night Distillery, one can’t help but be mystified and inspired. It is the kind of stuff legends are made of. Ideas born from campfires, desert skies and the camaraderie of close friends, now take tangible form in a little shop tucked in the south end of the LA Arts District. It is here that Aaron’s dream to create unique, small batch spirits has come to fruition.

“Learning how to distill was just a hobby of mine born out of curiosity. That hobby became a bit of an obsession. That obsession became a business…a lot of experience with actual distilling has to come from practice. You have to try and fail a lot before you can understand things.”

This could also be said about the business side of the distillery too. As an art major from a quaint New England university, Aaron’s business experience was a bit limited at the start. But, his qualities as an artist served him well. He used his gifts of creativity, self-motivation, and problem solving to simply figure it all out.

And lest we forget, the massive amounts of hard work and sweat equity that have been poured into his endeavor. In the very beginning, Aaron spent tireless hours financially supporting his dream by cruising around LA, installing art. After work, he would head straight to the distillery to experiment, create, and work on his concoctions until the wee hours of the night. The next day, he’d be up before the sun to do it all again.

These days, most of the cruising he does around LA is to deliver his wares to his eagerly awaiting customers. With the onset of COVID and loosening laws related to alcohol sales and delivery, Aaron has been able to go direct to the people instead of strictly through a distributor. It has been nothing but a success.

“In March, a few laws were altered and regulations were relaxed to a point where I was allowed to make direct customer sales through my website and make deliveries. That has been huge. Just being able to interact directly with individuals has been such a boost for me.”

So Dead of Night went from possibly being dead in the water because of the pandemic, to being very much alive and well. Whether it’s the popular, more traditional gins or the unusual, yet worldly and spectacular blends like Aquavit (with flavors of Lemon, Caraway, Fennel, and Dill), Dead of Night will bring it right to your door.

Maybe you are more of a rum or vodka drinker. You may like to try their Calicitra Vodka, which was originally intended as a one-time release. It was so popular, Aaron had to make another, even bigger batch.

Clearly, the creativity and invention at Dead of Night has only just begun. This year, Aaron hopes to release some really special things he has been working on. These include a Soju (Rice-based Korean Liquor) and an Amaro (bitter and herbal Italian). He is also working on a moonshine-esque blend that pays homage to the wildflowers and honey bees of California. And last, but certainly not least, who doesn’t love a little caffeine with their alcohol? A cold-brew with cacao spiced rum is on the horizon.

Eager to give some of these treats a try? You can find products like the gins and vodkas at select retailers in Southern California such as Hi-Lo, Farm Shop, Mission Spirits, and Flask and Fine Wines. If you are looking for the more unique items like the Aquavit and the other special blends mentioned, you will find those and more on the Dead of Night Website. Order a few selections or become a member of the Moonlight Club, giving you special access to up and coming spirits, bottles of their staple offerings, discounts and more.

Aaron is grateful that his distillery and his dream are still alive. He believes that unless 2021 delivers twice the crazy as 2020, he is on the right track and things will continue to grow and prosper.

“If things continue to grow, I do have a project that I would love to start. One thing that I have been thinking about for years. It’s the reason I started this distillery and it was the inspiration for the idea in the desert. My favorite spirit. Whiskey.”

I think it’s safe to say, this is another desert darkness and night idea we can all get behind.