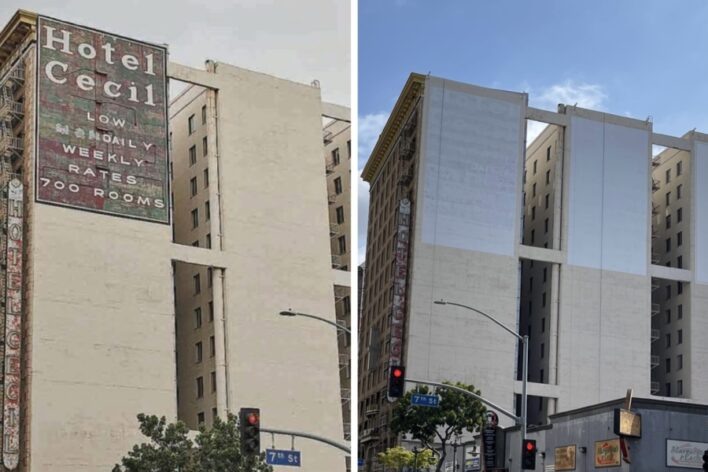 When are the newbies ever going to learn? Don’t mess with Downtown LA’s historical landmarks or face the wrath of our long-time community dwellers, historians or worse, attract the negative attention of all-knowing, all-seeing conservationists Kim Cooper and Richard Schave of Esotouric’s Secret Los Angeles.

For years the two have taken a firm stand against companies that threaten our historic landmarks. The dynamic duo offer tours, webinars, and author books about our historic surroundings dig up archives and create a community around a shared passion for Southern California history.

Maybe you had a chance to see their cameos during the Netflix special “Crime Scene: The Vanishing at the Cecil Hotel” a few years back. If not, know that you are relentless about what they’re doing and don’t think twice about fighting real estate corruption or soiling the name of local politicians plus, they’ve got powerful allies in high historic places.

Recently, the two have become infuriated by the news that the red-painted signage on the side of the Cecil Hotel that once read, ‘Hotel Cecil Low Weekly Daily Rates 700 Rooms.’ had been completely whitewashed.

The historical signage on the side of the building,  which could be seen for miles, had been in existence since at least 1927.

Close colleague, architectural historian Nathan Marsak, aka the Cranky Conservative, ranted on Esotouric’s Secret Los Angeles’ Facebook page while sipping an Old Fashion, about the misjustice of the protected landmark, saying that when the owners “need to face a public shaming.” He suggests that the hotel owner hire a talented sign painter to redo the original signage.

But who is to blame?

Could it be the property owner? The property is owned by New York City hotelier Richard Born, owner of BD Hotels, a real estate development and hotel operation company with ownership interests in several billion dollars worth of hotels. Born purchased the property in 2014 for $30 million. Could this be another case of a newbie who has once again damaged the Downtown L.A. culture – whether knowingly or not?

If so, the mistake could cost the owners…big time. The historical building is protected under the Mills Act, which requires owners to “rehabilitate and maintain the historical and architectural character of their properties.” In return, property owners get a significant reduction in property taxes. By painting over the historic exterior of the building, the owner violated the Act and supposedly now owes the city more than four million dollars for breach of contract.

Or is the lessee responsible? Another New York-based firm, Simon Baron Development, acquired a 99-year ground lease on the property from Born recently after BD Hotels purchased it. The property closed in 2017 to undergo a reported $100-million renovation. At that time, Matthew M. Baron told the Los Angeles Times, “We are gutting the entire building. We are going to redevelop it from the doorway to the roof and everything in between.”

What about the sub-lessee? The hotel, which has a creepy history of more than a dozen mysterious deaths over the years, was converted into a for-profit affordable housing complex which opened in December of 2021 in a partnership between Simon Baron Development and the Skid Row Housing Trust.

In this case, that means housing people in one of the supposedly most haunted hotels in the world.

Artist Matthew Garcia has been commissioned to paint a mural on the building. Garcia recently told  Downtown Weekly, “Oh snap, this is pretty controversial. Yea, it’s been fun, I got to go inside the building and had the pleasure of riding the elevator straight to the top. The interior lobby is magnificent. I respect and highly regard the spirits and entities that inhabit that hotel. With much due respect, I, as an independent contractor and member of the Walldoggs Muralist company, have to say it is a true honor!”

Conservatives suggest that the artists and owners paint nothing unless to restore the sign to its ordinal glory.

Only time will tell how the spirits in the building may feel or react. May we suggest they repaint the sign in blood-red so as not to anger them any further?