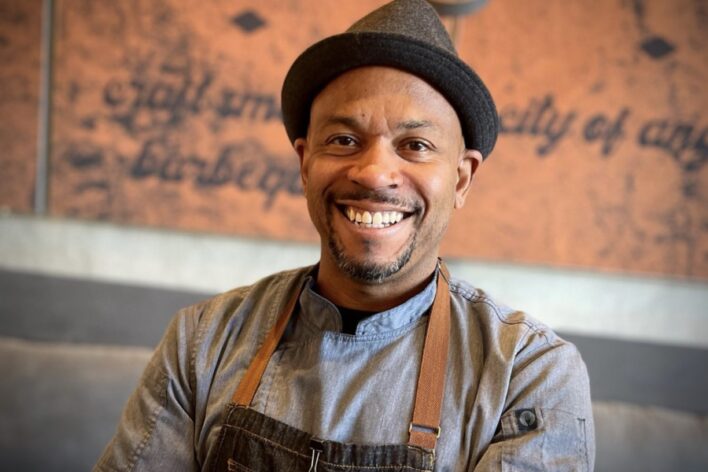 Sitting across the table with master Chef Omari Williams at Smoke City Char Bar, one thing is for sure; downtown LA just got a whole lot sweeter.

From his BBQ Baked Beans, Honey Buttered, Cast Iron Cornbread, watermelon salad to a flight of BBQ dipping pools ready for each plunge of his tasty Baby Back Ribs, every bite tells the tale of a lifelong calling, family inspired plates and friendships that led him here.

Back then, Sous Chef Williams worked with Executive Chef Michael Reed (currently of Poppy & Rose) at Wolfgang Puck and later at the Standard Hotel in West Hollywood.

Williams credits Reed as a master of all trades from hammer to ladle and an amicable Chef who first showed him the ways of a fine-dining kitchen. The two became best friends and continued to work side by side for over a decade.

In the years that followed, Chef Williams had become his own boss, catering healthy meals for private clientele while spending weekends donating his time and talents to feed the unhoused.

During Covid, fresh from hammering nails with Chef Reed, completing the upstairs patio for Poppy & Rose, an agent randomly contacted Williams from a resume he’d skimmed online with an opportunity of a lifetime – to man his own kitchen in the Arts District of Downtown LA.

In conjunction with restaurateurs Cathedral Hill Associates, Chef Williams can now be found slow cooking up to 500lbs of craft-smoked meats over a 12-16 hour period at the base of the Aliso apartments.

Indeed, with his background in fine dining, Chef Williams could have brought any restaurant genre to DTLA, but he came up with the idea to offer us something a bit more hip than a traditional bbq spot.

Chef Williams tells DT Weekly his favorite menu item is the Beef Tri-Tip. At Smoke City, diners may have the meat prepared in an artisan salad, sandwich, or an entree with a choice of sides.

His gourmet-style BBQ with side plates including meaty Mac N Cheese, Cole Slaw, and Deviled Eggs with feta cheese, pickle relish topped with burnt ends brisket are a hit, tempting everything that has to do with summer.

Ah, Smoke City Char Bar…. Come for the food, stay for the drinks.

Cocktail bar highlights include the Lass Fashion featuring Bulleit Rye, orange bitters, molasses, and a filthy black cherry garnish, and the Mamba, made in homage to the legendary Kobe Bryant; this cocktail’s winning mentality is a mix of Woodinville Rye, mint, blackberries and lime. And please don’t forget to try the New Aliso!