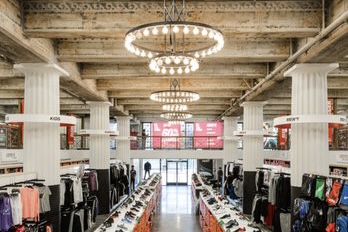 DTLA should expect to see lots of WSS promo during the Dodger Games from now on and lots of Official Dodger game promo the next time we shop for shoes at WSS.

The Los Angeles Dodgers announced a multi-year partnership with WSS in a ceremony held at a WSS location in Canoga Park. Also the  home of the Dodgers AM 570 LA Sports, the ceremony was broadcast live for the Dodgers’ pregame show with former Dodger Andre Ethier making an in-store appearance and meet fans.

The event was open to the public and included games, raffles, prizes, live music and more!

For several years to come, WSS will have presence at games, team events and Los Angeles Dodgers Foundation programs. In addition, WSS and Dodger partnership elements will be showcased at WSS stores featuring premier footwear and apparel inspired by in inner-city style. Known for carrying top name brands which include Nike, Jordan, adidas, Vans, Converse, Puma, Reebok, Fila, and Timberland, WSS DTLA enlist a historic building to house its merchandise located on Wilshire and Union.

“The entire WSS team is very excited to announce our partnership with the Los Angeles Dodgers. The Dodgers are a staple of Los Angeles culture and an icon within the communities and families that we serve, so this partnership is extremely special to us. We look forward to seeing this partnership come to life over the next few years,” said Rick Mina, WSS President and CEO.

“We’re proud to partner with WSS, who like the Dodgers, is a community-minded company that is committed to delivering an exceptional customer experience,” said Corey Norkin, Dodger Vice President of Global Partnerships. “Their roots in Southern California and locations throughout Los Angeles make them an ideal partner to help serve our community and we look forward to a great partnership for many years to come.”