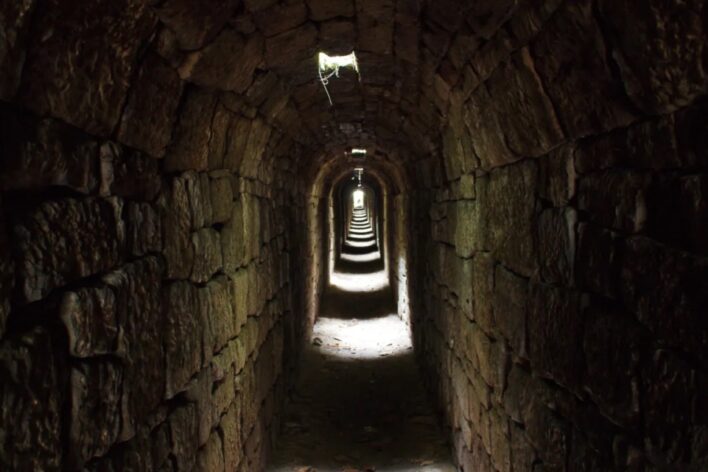 Tunnels made 5000 years ago by a super intelligent race of Lizard People that were so intellectually and technologically advanced they used acidic chemicals to dig 285 tunnels with chamber rooms large enough to fit 1,000 families and hordes of gold?

Ah, no.
Most said rats, and those huge roaches that end up crushed along the sidewalk. But when it came to tunnels, most mentioned the Metro, the Old Street Cars and Prohibition.

And although the legend of the Lizard People is a thing according to 1930s geophysicist George Warren Shufelt, his radio-x Machine, and the LA Times, of the many tunnels that lay beneath, few ever mention the hidden catacombs of Downtown LA.

When searching for photos of DTLA tunnels you’re bound to come across old photos of modern era dugouts to hallowed out spaces just large enough to fit barrels of rum. Just as interesting, the preserved photos of LA’s first subway. Imagine several hundred trolley cars, or “RED CARS”, rattling their way through a mile of tunnel before exiting on Hill Street in 1925.

With as many photos as you can find, there are only few photos of the catacombs in existence.

The catacombs aren’t tidy, nor do they offer a comfortable passage. Although there is plenty of air, they’re dark, dry and require the explorer to hunch way down in order to get through. There are no visible damp spaces, wired lights, critters or cuts and crevices upon which critters can hide.

The catacombs of Downtown LA are man made are pretty much square shape and form, spanning 4 to 6 feet high and wide, and can only be found beneath the basements Downtown’s most of historic buildings.

The catacombs were meant to be used as escape routes and modeled after the palace catacombs of Europe, which were common for centuries before the founding of Los Angeles in 1781. Flash forward to America in the early 1900s to find architects of yesteryear influenced by the old world bent on establishing the new.

Catacombs combined with 11 miles of Speakeasy Tunnels would pretty much allow underground passage from historic building to the next. There is well known Speakeasy tunnel long sealed off in the basement of the King Eddy and historians have logged an entire bar that dates back to prohibition beneath the intersection of 5th and Main Streets.

Could these catacombs still be in use to this day?

Ledger states most of the tunnels are sealed off. Metro and the old subway can only be accessed by special permission, while the Speakeasy Tunnels are supposibly hidden behind layers of mortar.

However, secrets.
Secrets kept for more than a century will not easily slip through the lips of those who know.

Before exhausting his efforts, losing his credibility, becoming the laughingstock of the town and silenced trying to reveal the lost Lizard Tunnels, Shufelt’s radio-x Machine was able to draw a map and pin point the underground tunnels and chambers of hidden gold. Seemed the Lizard People had carved their tunnels in the shape of a lizard, supposidly the tail end of the tunnels are located under the LA Library.

But, the LA Library doesn’t look at all like it would hold any secrets, does it? No.