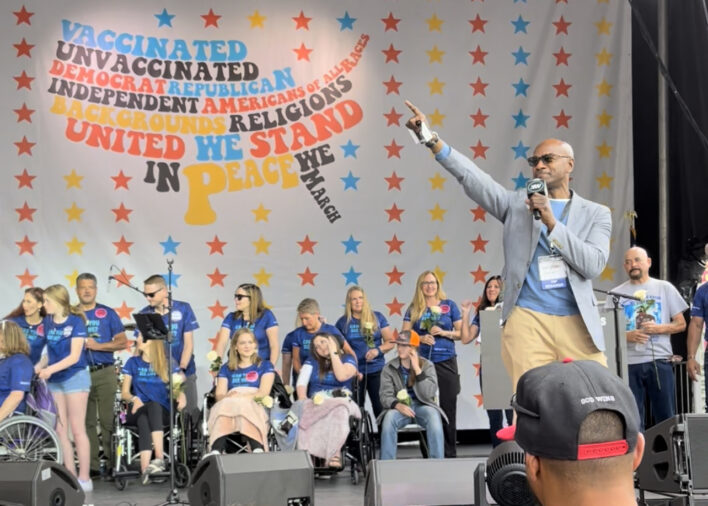 In this realm, human beings consist of three parts. The mind, the body and the spirit. For the spiritual person inside of each and every one of us is God, eternal, righteous and unrelenting.

Holding this eternal being is a shell that, on this planet, comes in the form of a man or a woman, available in an assortment of colors as we mix and match with an orgasmic burst of cosmic energy.

From birth to the earth, our minds begin as clean slates, gaining knowledge, fine tuning reasoning, and holding on to memories.

The mind intends to comprehend and form conclusions that govern our actions and belief system and once it’s convinced of something, it’s very hard to let it go. But, what happens when we are bombarded with negative messages against our fellow man by our parents, teachers, lawmakers, religious leaders, bosses and media who establish themselves as our authoritarians long before our fresh young beings arrive?

Over time as opinions form, we become divided; we are left seeking others with like minds to reaffirm our sense of belonging, draw lines in the sand, and eventually – we fight for what we believe in.

Downtown Weekly stood among the many during the Defeat the Mandates rally held on April 10th at Grand Park. The same rally that has been the spark of ridicule for hosting what the authoritarians and mainstream media deemed as a group of white Trump-supporting racists; demented rebels bent on overthrowing the capital and spreading the Corona Virus.

But was that the case? Perhaps, if what the authorities had been telling us these past two years was authentic. However, as we witnessed children in wheelchairs suffering from vaccine injuries from shots continuously labeled as “safe and effective,” it was understandable how parents and children of all political parties and races would be interested in a rally such as this.

And for the racist who supposedly convened on our city with messages of hate… well, organizer and master of ceremonies, a black man by the name of Kevin Jenkins, often called for group hugs among the massive mixed race crowd that no one, we saw, had any problem with.

Instead of a country divided, we witnessed people of every ethnicity, age and religion hugging, crying, consoling each other, cheering, and coming together in an honest attempt to override whatever beliefs had kept them from doing so before this moment.

Proof of this reached its pinnacle as a tall, young black man dressed in a black suit with a red bow tie named Rizza Islam took the stage. “I am here representing the honorable Louis Farrakhan”, he spoke proudly. And for a moment, the entire crowd was almost silent.

But, on the contrary. As Rizza Islam continued his charismatic message of freedom, love and self-dignity his message transcended the mind and body of the crowd reaching the very soul of it. By the end of his speech, the crowd was cheering Rizza Islam with all their might.

A similar reaction by the crowd was given to quirky Rabbi Michael Barclay, who ended his speech with a prayer in Hebrew. The same response for a little girl activist who suggested we stop wasting time and get out there and fight for freedom.

The same reaction for the tearful parents who spoke of losing their children to a so-called “trusted vaccine.” Often the words “we love you” could be heard as sympathizers called out from the crowd.

As for the victims of Covid, empathy and anger, especially from a panel of doctors on the stage condemned for speaking out, insisting authorities were to blame for many of Covid deaths by limiting their ability to offer alternative treatments at the early stages of the pandemic.

They cited threats from governing bodies and social media censorship tactics bent on erasing laws that established a patient’s rights to conformed consent. They condemned messages and tactics that coerced doctors, patients and media viewers to rely on experimental drugs and mandated treatments.

They assured the crowd that Covid death and hospitalization could be prevented with early treatment and reaffirmed their commitment had always been to save lives.

Guest Speaker Robert Malone, creator and basically the Colonel Sanders of mRNA technology, took the stage to speak, confirming singer songwriter, Jimmy Levy’s message that this was “a war on religion and children”, followed by statements explaining that the current vaccine was outdated and no longer warranted because it had no effect on the newest Omicron mutation of the virus.

From heroes to zeroes, the LAFD and nurses known for rushing into danger found their support at the rally. The entire past two years was aired, and not one contradiction from authorities was left unmentioned. And now, it was time to hold the authorities accountable.

Although our news outlet would like to express gratitude for the permit, barricades and security signed off by the Mayor’s office, there was no love lost for Dr. Anthony Fauchi, the CDC, the WHO, or the Governor of California. The event speakers also seemed to give Mayor Garcetti a pass by not mentioning him at all.

Speaking of which, missing at the rally interestingly enough, political leaders, sworn to uphold the constitution (although there were plenty of references to President Joe Biden etched on picket signs and across T-shirt’s) – surely they would be there to stand for the bills and mandates they had imposed.

For the panel of speakers, however, there had never been an opportunity granted by these authoritarians for any “one on one” debate.

However, there could be no debate on this day Downtown was filled with truck horns, microphones, and like-minded cheers blaring in support of the founding concept of our country. Despite rumors and preconceived notions that kept some from attending, the Freedom Rally in the City of Angels transcended race, political prowess and gender while exposing our true humanity, relating most importantly to what the mind, body and soul want. – Life, liberty, and the pursuit of HAPPINESS – Happy yet?

Disclaimer: Do you know Downtown Weekly LA was content with presenting positive press, diversity, and accomplishments of Downtown Los Angeles since 2016. For years we posted light-hearted articles, trivial photos and happy smiles until 2020 when the sh.*t got real.

Freedom of the press is a first amendment right !!! As proud Americans, we stand by it, protect it and fight for it …but we need your help. Please subscribe, share, donate, advertise and support our tiny independent media outlet … and continue to visit our pages for trauma relief.

Thanks for reading! Good luck and may God bless you always.