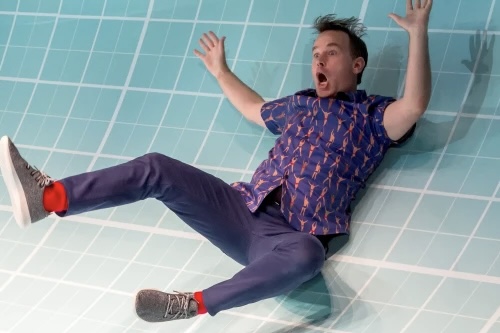 The world premiere of “Mike Birbiglia: The Old Man and the Pool” opens at Mark Taper Forum. The one-man show is written and performed by Mike Birbiglia and directed by Seth Barrish.

On the heels of his award-winning Broadway show “The New One,” which made its West Coast premiere at the Ahmanson Theatre, comedian and storyteller Mike Birbiglia returns to Center Theatre Group with a tale of life, death and a highly chlorinated YMCA pool.

With his unique form of comedic storytelling, Birbiglia chronicles a coming-of-middle-age story that asks the big questions: Why are we here? What’s next? And what happens when the items at the doctor’s office that you thought were decorative become quite useful.

Mike Birbiglia is a comedian, storyteller, director and actor who has performed in front of audiences worldwide, from the Sydney Opera House to Carnegie Hall. His shows, “The New One,” “My Girlfriend’s Boyfriend” and “Thank God for Jokes,” were all filmed for Netflix.

In addition to performing live, Birbiglia is an author and filmmaker who wrote, directed and starred in the films “Sleepwalk with Me” and “Don’t Think Twice.” His book “Sleepwalk with Me and Other Painfully True Stories” was a New York Times bestseller and a finalist for the Thurber Prize for American Humor.

As an actor, Birbiglia has appeared on “Inside Amy Schumer,” HBO’s “Girls” and “Broad City,” as well as in the films “Trainwreck,” “The Fault in Our Stars” and “Popstar.” He played the role of Danny Pearson on “Orange Is the New Black” and Oscar Langstraat on Showtime’s “Billions.” He is a contributor to “This American Life” on public radio and was honored with the 2017 Kurt Vonnegut Award for humor.

Tickets for “Mike Birbiglia: The Old Man and the Pool” are currently on sale and start at $30. They are available through CenterTheatreGroup.org