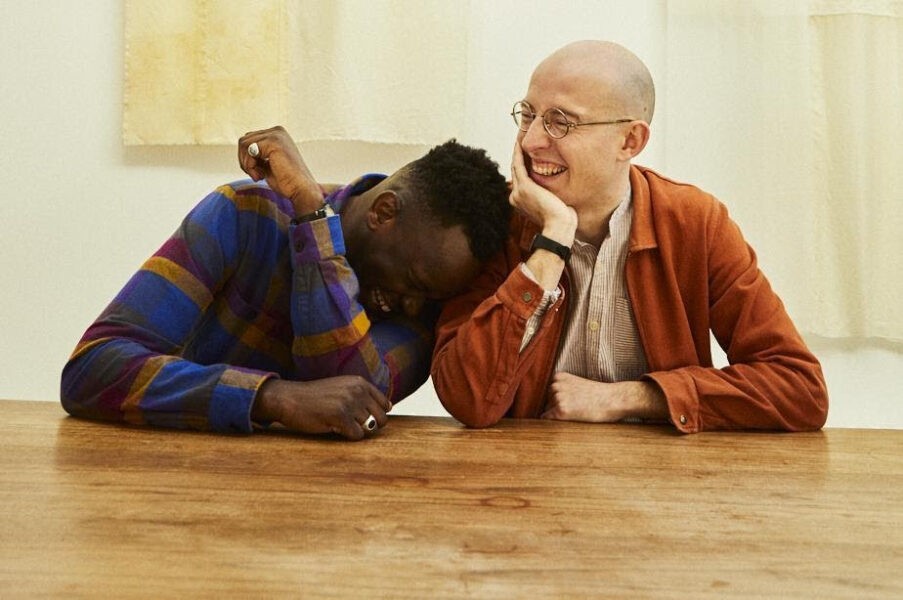 The Locketwill be released on July 2, 2021 via The Locket Records / Virgin Music

Mr Jukes & Barney Artist announced their collaborative album, The Locket, out July 2nd via their own label The Locket Records / Virgin Music. The pair–who were instantly bonded by a mutual love of the ever-changing landscape of modern hip-hop–also just shared their new single “Vibrate” along with a video that sees them take over UK amusement park Alton Towers.

“Vibrate” is a playful introduction to the world Jukes (Jack Steadman) and Barney have created, built on a mutual love of A Tribe Called Quest and J Dilla, alongside contemporary heavyweights like Kendrick Lamar, Kano and Ghostpoet. Its breezy, laid back energy is purpose-built for summer listening and soundtracking moments as the world reopens. “Vibrate was the very last song we made for the album,” Barney explains. “It really summarizes mine and Jack’s relationship which is great vibes with a meaningful message.”

Its accompanying video sees Mr Jukes and Barney take a trip to an empty Alton Towers, breathing life back into a space that’s been deserted for too long. The pair initially asked permission to film on a rollercoaster to help Barney conquer his crippling phobia of roller coasters but, when Alton Towers instead offered them private access to the whole theme park, they knew they had to take advantage of this once-in-a-lifetime opportunity.

“Vibrate” is the second single from the album, following last month’s “Blowin Steam (Open Up Your Mind).” The Locket features ten sunshine-dappled, psych-tinged, hip-hop flavored, leftfield pop tracks cut from sessions that span over eighteen months. Beats, bars and a unique sort of retro futurism that zips from sepia-tinged to full technicolour almost as fast as Barney’s flow. Its title track refers to memories of happier times: “we fill a locket with memories we protect, and don’t forget to keep it round your neck.” It’s a reminder to focus on positivity in the face of adversity. A collaborative project designed to be enjoyed together. A celebration of music, unity and looking ahead. “The aim is to bring hope to people after the maddest year,” Barney says. It couldn’t have come at a better time.

During a period of prolonged inactivity, Jack Steadman, best known as the frontman for the celebrated UK band Bombay Bicycle Club, scratched an itch to do something new with the release of God First. We say ‘by himself’ but it was very much an open-door policy, resulting in a collaborative record that brought contributions by legends such as Charles Bradley, De La Soul, Horace Andy, Lianne La Havas and BJ The Chicago Kid. The album also features the first Jukes x Barney collab with “From Golden Stars Comes Silver Dew” which also featured Lalah Hathaway.

Barney’s music takes the vibrance of jazz infused hip hop but with a London feel. Growing up in Forest Gate, East London, Barney touches on conscious themes by way of lively, dynamic delivery to create something instantly likeable, like the artist. He’s a larger than life presence, fun to be around and a searing, peerless talent too. A collaborator by nature, Barney grew up around Tiana Major9 and Jay Prince and has made music with close friends Tom Misch, Alfa Mist and Jordan Rakei.