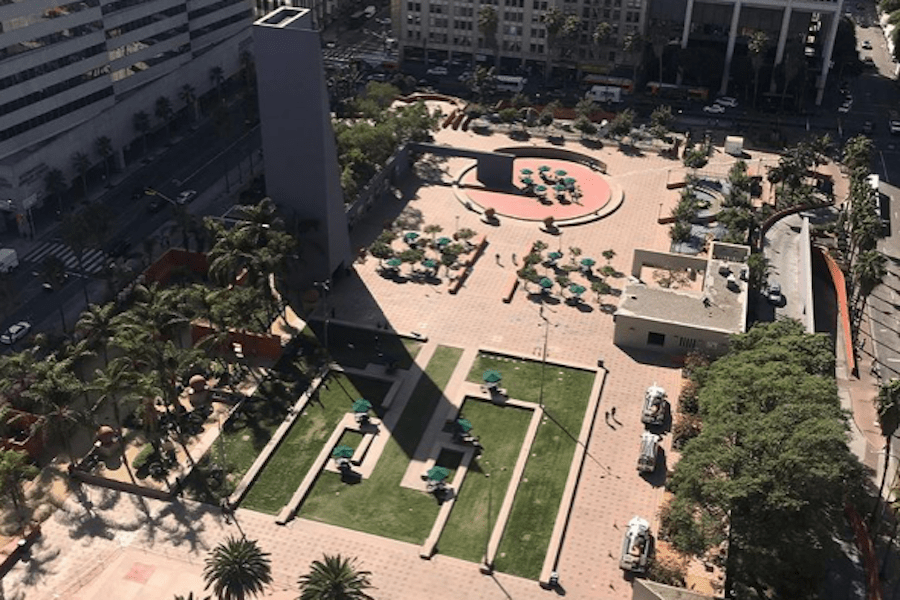 It may be little, but oh, is it so mighty…mighty controversial.  DTLA’s one-block wonder, Pershing Square, has seen a lot of life, a lot of transformation, and now a lot of drama in its years of existence. With origins dating all the way back to 1866, it only makes sense that Pershing Square has literally seen it all.

In recent years; however, the majority of what the park has seen and experienced has been drama and controversy.  Not only has Pershing Square become a space that has largely been avoided by DTLA residents and visitors, but its current design has come under a huge amount of scrutiny. A one-time bustling, city center hub of activity, today you can hardly find but a handful of people enjoying their lunch in the sun or strolling through to people watch, because well, there aren’t many people to watch. Could it be, its uninviting and almost repelling current look has kept the park from being the pulsing, lively heart of downtown that it once was?

Thankfully for all of us, community organizers and historic preservationists like Kim Cooper and Richard Schave, are coming to the rescue. Kim and Richard are the founders of the Pershing Square Restoration Society. Setting its sights not only on restoring and revamping the park to make it usable again, this advocacy group is also ensuring the history and heritage of the park is maintained and honored at the same time. They definitely have their work cut out for them.

When embattled former city councilman Jose Huizar launched his “Pershing Square Renew” project in 2016 (which started with a design contest), the Pershing Square Restoration Society jumped into action making its case that the park did not need yet another failed redesign, but rather, a renewal and restoration of the classic 1910/1931 John Parkinson design.

“We formed the PSRS advocacy group to give the public a voice through petition, and to promote the idea of the 1910/1931 John Parkinson design for the park being included in the redesign options that the public was invited to vote for as part of Jose Huizar’s Pershing Square Renew initiative.”

Despite Huizar ensuring the Pershing Square Restoration Society would be part of the design contest and that the public would be able to vote on the John Parkinson design, in the end it was left out of the contest all together. Also seemingly left out of the mix in this ordeal were major players like the park’s advisory board and the LA Conservancy. If involved, it wasn’t clear to the public.

The “winning” design was by The Agence Ter, a French landscape architecture agency. Kim Cooper noted that the winning design garnered fewer votes than did the petition that was circulated by PSRS for the restoration to the John Parkinson design.

Sound messed up? Just wait, there’s more! Although the word on the street was that work was to begin on the park remodel at the end of 2020 (so, right now), things have come to a screeching halt for several reasons. First, The Agence Ter design has now been found to be unsuitable and basically unbuildable on the park site. Some of the design elements proposed are frankly impossible.

Next, our former city councilman, Jose Huizar was hit with a 34-count Federal indictment in July. Included among the charges are a RICO charge, honest services wire fraud, bribery, money laundering, and the list goes on. You can check out more details on that at the US Attorney’s Office Website. Further indictments came out in November, implicating former Deputy Mayor Raymond Chan and others in the scheme.

The gist of it is, Huizar is accused of using his position and power to collect bribes and line his pockets. Of course, he is innocent until proven guilty and we don’t yet know all the details.

Further, money raised by Huizar and his committee appears to be gone and the non-profit he created for this project, also bearing the name Pershing Square Renew, is now defunct. According to the California Secretary of State’s Registry Reports, the non-profit is no longer operating and is in the process of dissolution.

And you know the saying, “follow the money?” A quick glance at Pershing Square Renew’s IRS filings and their data on CauseIQ.com might make you go, “Hmmmmm?” But of course, I’m just the messenger here.

So, where does that leave us in regards to poor Pershing Square and where do we go from here? There is still hope. Kim and Richard believe that the park will go back to being under the authority of the Department of Parks and Recreation, which does appear to have some funds set aside for a makeover. The Pershing Square Restoration Society is still out there advocating and fighting the good fight for the park to get the attention it deserves.

“We are launching our 2021 season of live Saturday webinars with a program about the park’s history and potential, and look forward to discussions with the newly elected council member Kevin de Leon about how to improve this important, neglected public space.”

Speaking of the webinars, you can check those out along with other information on the work of the Pershing Square Restoration Society, plus other work that Kim and Richard are involved in at esotouric.com.

As citizens of DTLA, there are things we can do to help too. We can support organizations like PSRS and the LA Conservancy by consuming their content, watching the webinars and educating ourselves. Reach out to new Councilman Kevin de Leon. Let him know how important this space is to us and more.

Together we can make things happen and help get this park back to its beautiful, former glory. Stay tuned!