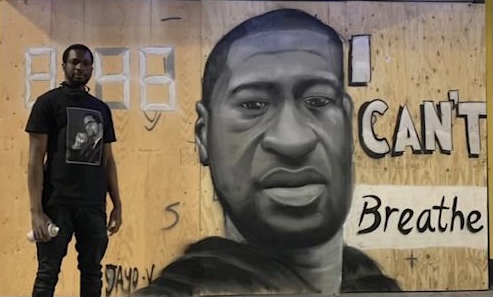 Three female dancers, four voiceover actors and a moving soundscape propel “George Floyd: The Father of the Reimagined America,” a blending of poetry and movement that celebrates George Floyd.

His death, along with that of Breonna Taylor and Ahmaud Arbery, and others, were the catalyst for what many are calling a modern-day civil rights movement. Based on a poem written by John Lee Gaston White, adapted for the screen by John Lee Gaston White and Lakisha May; and directed and produced by Lakisha May, “George Floyd: The Father of the Reimagined America” includes music by Jimmy King, choreography by Nia Lancelin-Brantly and animation by Josh Sessoms.

Moderated by arts leader Keryl McCord(founder/CEO of Equity Quotient), “Journey Towards a New American Theatre: George Floyd’s Lasting Impact” asks the questions, had George Floyd not been murdered, would arts organizations across the country have taken such immediate and serious steps toward becoming anti-racist? How did the death of an otherwise ordinary man help change the world, and in turn, the future of American theatre?

In this free discussion, panelists including playwright/actress and Theatre Communications Group, Board Chair, Nikkole Salter (“In the Continuum” at the Kirk Douglas Theatre), and writer John Lee Gaston White (“George Floyd: The Father of the Reimagined America”) will explore how art and art makers are beginning to reflect a world that is forever changed by the power of George Floyd’s legacy.

The Fire This Time

Center Theatre Group, The Fire This Time Festival and Watts Village Theater Company present the second episode of Not a Moment, But a Movement titled “Black Nourishment” premiered April 15 and is available on demand through June 15, 2021, at www.CTGLA.org/NotAMoment.

The video is offered free to Center Theatre Group subscribers and supporters and cost $10 for all others.

Part of a series of events that amplifies and centers Black artists, the second episode of Not a Moment But a Movement, “Black Nourishment,” is directed by Tyrone Davisand Bruce A. Lemon Jr and introduced by Ron Cephas Jones. “Black Nourishment” features the jazz-tinged hip-hop music of LA-based Sugi Dakks performing with Jarren Heidelberg (drums), Josh Howard (bass), Aaron Mastin (keys) and Terall Whitehead(guitar) as well as the work of spoken word artists and muralists from throughout the United States.

Associated Content for “Not a Moment, But a Movement”

“Sustaining the Movement: Elevating Black Artists,” is a panel for this second episode of Not a Moment.