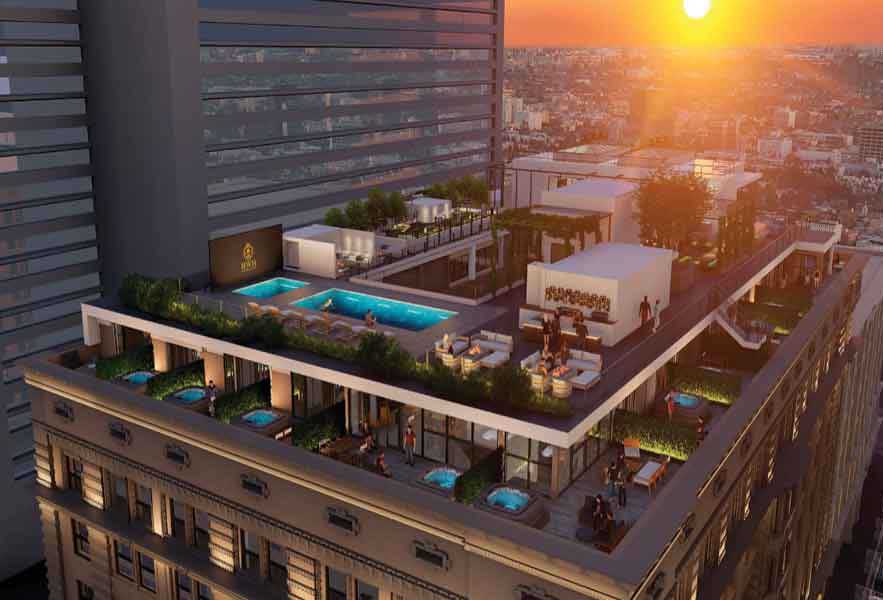 In 1903, The Herman Wolf Hellman Building was not only visually stunning, with its row of fang faring wolf head sculptures, hard wood floors, heavy mahogany doors, Tiffany and stained glass, natural lighting and dual marble staircase, it was also a technological advancement the likes LA had never seen, leading the way to how buildings would be constructed until this day.

Being the first to develop a high rise office building with foundation beams forged from steel in Los Angeles, Herman Wolf Hellman’s HWH Building, the LA Times reported, was “the biggest and most luxurious building in Los Angeles at that time.”

HWH Building was a pillar of  finance, marking the beginning of the banking era on Spring Street later famed as “the Wall Street the West”.

In the 70s the building was acquired by Banco Popular financial services who put up a neon marquee to establish their dominion and during the 90s, the City occupied the building covering much of the high ceilings with insulation, fluorescent lights, installing intercoms systems and covering the old wooden floors, windows and doors with layers of linoleum, paint, and cheap carpeting.

HWH LUXURY LIVING: WHERE PAST AND FUTURE COLLIDE

During the process, the developers decided the HWH Luxury Living would be slated for mixed-use, meaning the ground floors would host retail while the upper floors would provide exceptional apartment living to its residents, creating one of the best apartments in Downtown LA.

The HWH Luxury Living Apartments quietly re-opened in late 2019 as one of the most sought after apartments in downtown Los Angeles with all the luxury and grandeur of the 1900s plus a few suave technological add-ons that take smart home technology to a whole new level.

In 2010, the property was acquired by Standard Development with the sincere intention of restoring it to its former grandeur and placing it on the National Register of Historic Places, designated as a federal monument.  Standard Development restored this treasure by preserving the historic fabric of the building, while providing all modern living amenities of today.

Each unit is equipped with Google Home, built-in bluetooth speakers, Nest Thermostats, Ring Video Doorbells, and Z-Wave connected outlets and switches which allow the residents to control their apartment features through their smart phones or verbally.  You can say, play “Dancing Queen” and in your apartment magically “Dancing Queen” plays.

Bosch stainless steel, state-of-the-art appliances, including washers and dryers also come with each unit.  Epic Italian Marble countertops may be illuminated by purposely set lighting, and European contemporary sliding walls separate the kitchen and living quarters from the office space and secret bedrooms.

The view from huge apartment windows allow the surveying of Spring and 4th Streets but nothing matches the view from Hellman’s new rooftop.

The 360 degree views from the HWH Luxury High Rise Apartments in Downtown LA are unobstructed from all sides, revealing the city’s vast scape of industrial buildings to the east, its mountain view’s of the north, and its spectacular views of the financial district buildings to the west; so close you can almost reach out and touch them.

Gone are the spinning vents, water tanks, cables and tarred rooftop flooring. Instead, the HWH Luxury Living rooftop has been replaced with an atmosphere that’s youthful and chill with plenty of encouragement for friendly conversations with neighbors.

Tenants at HWH Luxury Living enjoy basking in the sun’s rays all day long, salt water jacuzzi dips and swimming in a salt water pool with underwater speakers that makes them feel like they’re afloat on top of the city.

The rooftop is riddled with intimate lounges, beautiful olive trees with twinkle-lights and fire pits under the night sky with endless romantic views of Downtown.

Facing the sunrise, looking out to the distance, tenants work out on Technogym from Italy, a state of the art exercise facility complete with their own personalized Health and Wellness App that recognizes them as they approach and programs and tracks each work out.

With floraled pathways leading from edge to edge, HWH Luxury Living rooftop is a downtown labyrinth on top of one of the largest rooftop amenity decks in downtown Los Angeles.

HWH sets the bar with one of the best luxury apartments in Downtown LA. Surrounded by two new hotels, trendy restaurants, transportation hubs, and local dog parks, the building sits as a cornerstone for the Old Bank District.

Onsite parking concierge and valet services are available as well.