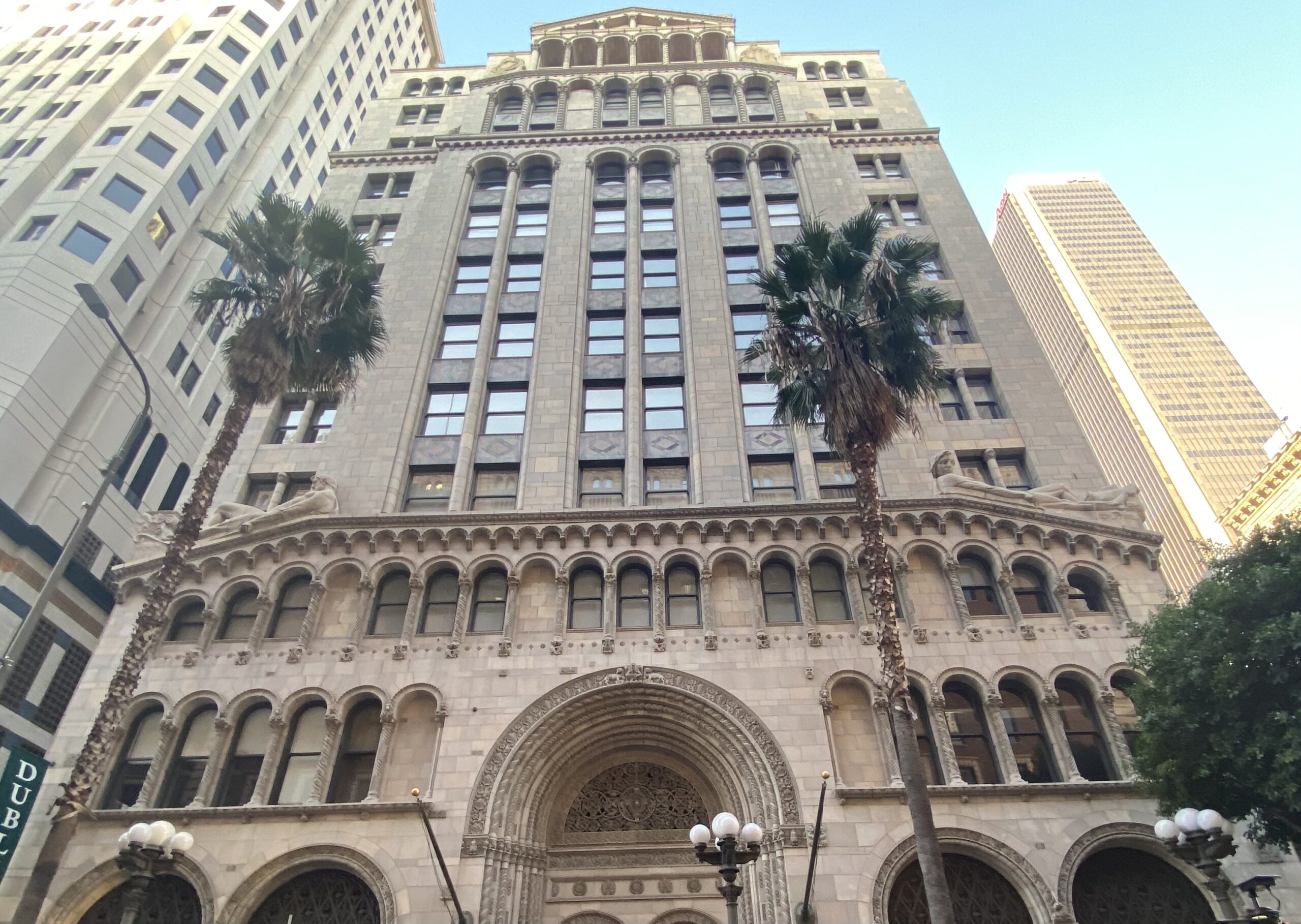 In its early days, The Fine arts Building was a hub for the Roaring 20s lifestyle of creation and merriment. The silent film industry was booming, and The Fine Arts building represented the growth of Los Angeles into a city as auspicious as those in the East.


Located between Figueroa and Flower on Seventh Street, in the heart of Downtown Los Angeles’ bustling Financial District, the Fine Arts Building has been a mainstay in Los Angeles since it first opened its doors on December 8, 1926.

Designed by Albert R. Walker and Percy A. Eisen, the same dynamic duo that brought us the Oviatt Building and the Beverly-Wilshire Hotel, The Fine Arts Building was a celebration of Los Angeles’ emergence as a modern metropolis. At twelve stories high, it was the tallest a building could legally be at the time, and was designed specifically as studio and gallery space for local artists and artisans.

As part of their mission to celebrate the art culture of Los Angeles, Walker and Eisen contracted numerous local artists to create the standout elements of the hotel. Among them was sculptor Burt Johnson, who created the nude statues that sit on the building’s façade, and used his own children as models for a statue in the lobby.

The building also features work by Pasadena tilemaker Ernest A. Batchelder, and painter Anthony B. Heisenbergen. The resulting building is a masterwork of Romanesque Revival, a designated Historical Cultural landmark and sight for sore eyes in the ever-evolving landscape of Downtown Los Angeles.

The Fine Arts building has housed galleries and luxury shops; it hosted galas, meetings for artistic groups, and avant-garde performances.  Unfortunately, when the Great Depression struck, artists suffered greatly. Art and craftsmanship were luxuries few could afford—and as a result, many of the original tenants of The Fine Arts Building could no longer afford to operate from there. Instead, the building became home to more standard commercial enterprises, including oil, real estate, and medical offices.

Oil wildcatter Russel E. Havenstrite used a penthouse to throw private parties for California elites, and the building was renamed after him. Within ten years of opening, The Fine Arts Building was a shadow of its former self.  In the decades that followed, the building passed through many hands and underwent extensive remodeling. Perhaps the darkest period was the early 1970s, just before it was declared a Historic Cultural Landmark in 1974.

Finally, in 1983, the historic building was faithfully restored by the same firm responsible for refurbishing the Oviatt Building, Bradbury Building, and Wiltern Theatre, among other significant Los Angeles buildings. Led by iconic Los Angeles architect Brenda Levin, Ratkovich, Bowers, and Perez recovered the original glamor and opulence of The Fine Arts Building.

In the time since, The Fine Arts Building has slowly returned to its roots as a space for showcasing local talent. Currently, much of the building is dedicated to office space, including a large WeWork coworking space with the ground floor hosting restaurants 10E and Dublin’s Irish Pub.

The Fine Arts Building is a piece of living history. Looking up at its intimidating Romanesque façade, it is difficult not to feel transported back in time, to an era when the city was young and served as the fulcrum of a new creative world. Now, it serves as a junction between history and the present day; all one has to do is step inside.