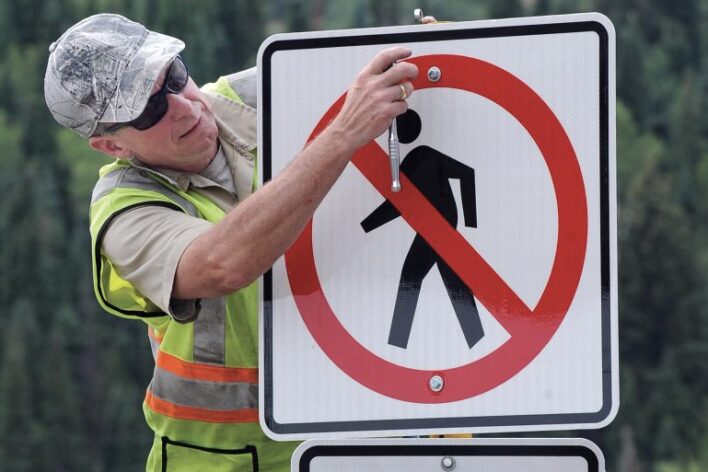 Thanks to a new bill signed October 1st by Governor Gavin Newsom; on January 1, 2023, pedestrians may no longer be issued Jaywalking tickets for crossing the street outside of an intersection.

Interpreting The Freedom To Walk Act (AB 2147) now signed into law, ”No longer will law enforcement be able to stop people who are safely crossing the street and burden them with citations and heaps of debt”, proclaimed Zal Shroff, Senior Staff Attorney at the Lawyers’ Committee for Civil Rights of the San Francisco Bay Area.

Jaywalking has been enforced in California since the 1930s, making the act of Jaywalking a life long taboo for many. When the new law goes into effect on January 1, 2023, anyone with sound mind and a bit of caution may step out and share the road with oncoming traffic without a care in the world, right? Wrong.

In the suburbs, basking in the rays of peace and tranquility, one might not see a car for over 20 minutes, making most jaywalking experiences a walk in the park. However, in the big city, anytime between the hours of 8am and 3am, there’s going to be cars whizzing by, making sharp turns and just doing what cars do, which sometimes ends in tragedy.

In September 2022, DTLA set a new record for number of hit and runs, the most recent involving the death of a pedestrian and his three dogs in the Historic Core. Each hit and run happened while the pedestrians were either crossing or waiting patiently at a cross walk.

Point being, if drivers have trouble seeing pedestrians at the cross walk, imagine how hard its going to be for drivers to get used to the sleepy turned sly, pedestrian soon to be entitled to any parts of the road, day or night.

When driving in the more congested areas of DTLA, motorist already have to deal with numerous mentally ill standing their ground in the middle of the street. Just one wandering lane-walker can back up traffic for blocks.

Not the act itself, however data released by California Racial and Identity Profiling Act (RIPA) showed Black Californians ticketed up to four-and-a-half times more than their White counterparts.

“Jaywalking laws do more than turn an ordinary and logical behavior into a crime; they also create opportunities for police to racially profile. A jaywalking ticket can turn into a potentially life-threatening police encounter, especially for Black people, who are disproportionately targeted and suffer the most severe consequences of inequitable law enforcement,” said Jared Sanchez, Senior Policy Advocate for CalBike.

To be honest, one less restriction with chains to our wallets sounds like a good thing as long as pedestrians remember the age old adage, ”Look both ways when you cross the street.” Throw in, “Stay alert when standing at the corners waiting for the lights to change, and stay alert while crossing, please and thank you”. #SurvivingDTLA

AB 2147, first introduced by Assemblymember Phil Ting (D-San Francisco), passed thanks to years of relentless efforts pooling support from fellow lawmakers who argued too many cases where ticketing jaywalkers resulting in unfavorable outcomes including heavy fines, escalation, false arrest, and even death.

“It should not be a criminal offense to safely cross the street. When expensive tickets and unnecessary confrontations with police impact only certain communities, it’s time to reconsider how we use our law enforcement resources and whether our jaywalking laws really do protect pedestrians,” said Ting. “Plus, we should be encouraging people to get out of their cars and walk for health and environmental reasons.”

Regardless of how many people are marked safe from Jaywalking, pedestrians of all ethnicities should use extreme caution while using the city streets.

For drivers, always remember the pedestrians have the right of way even when it comes to the lane walkers, sleepy pedestrians, and soon the infamous, DTLA Jaywalker.