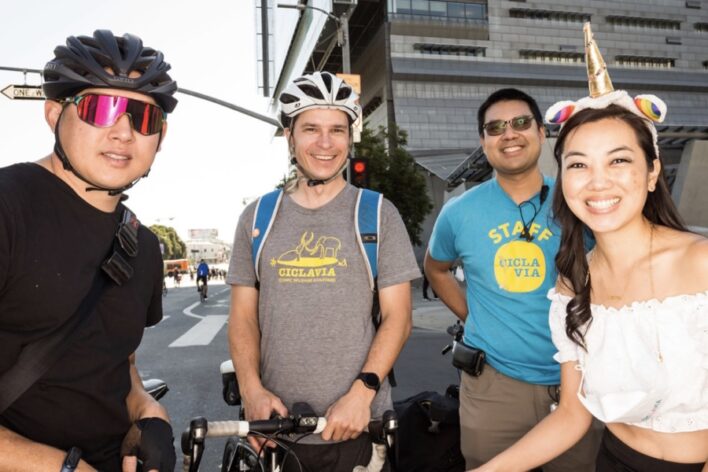 Just when we thought the next CivLAvia would take place on the 6th Street Viaduct, the creators of the event announced the next bikeride-hero fest will take place for the first time in Hollywood on Sunday, August 21st.

Not Just One Hollywood – But Both!

In partnership with the cities of Los Angeles and West Hollywood, CicLAvia will open 6.6 miles of streets connecting East and West Hollywood communities, temporarily turning car-filled streets into public park space for the day.

Sure, that means during this month’s CicLAvia (Downtown) will be minus the event’s patience-testing traffic jams, but also minus downtown’s most scenic routes, DrinkLAvia specials and 6th Street Viaduct excitement.

If there was ever a reason to utilize the new bridge, CicLAvia would surely be it. Yet, with various changes still being made to public access in between tickets and arrest for unscrupulous behavior, the City maybe backpedaling away from large scale events thanks to all that has plagued the bridge since its grand opening on July 9th.

Still, participants of all ages and abilities will enjoy a day to sightsee, play and explore local gems between East and West Hollywood, while experiencing the joy of safe, people-powered transportation on car-free open streets.

Plus, CicLAvia will return to downtown October 9, CicLAvia-Heart of LA, and to CicLAvia-South LA on December 4.

Inspired by Bogotá’s weekly ciclovía, CicLAvia has been temporarily closing streets to car traffic and opening them as public parks in Los Angeles since 2010. With more than 245 miles of open streets, Meet the Hollywoods is CicLAvia’s 40th event.

Instead of building permanent infrastructure, CicLAvia builds unifying social fabric, joyously connecting culturally diverse neighborhoods and neighbors to each other through open streets. Whether one bikes, walks, strolls, skates, or jogs, CicLAvia creates more incredible moments and experiences enjoying our city streets together.

Here are the rules!!!

Participants assume all known and unknown risks of participation in CicLAvia. www.CicLAvia.org