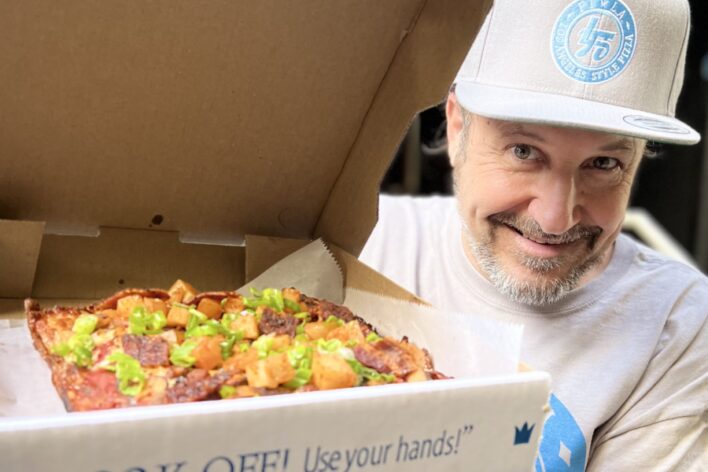 Chef Fred is among the visionary tastemakers once again adding restaurants in downtown to their list of ambitions. Former owner and operator of Tiara Cafe in the Fashion District, Chef Fred’s PI^LA marks his triumphant return.

While most of the time Chef Fred seems jovial and quick-witted, he’s quite serious whilst in the kitchen.

Smoked salmon, potato gratin, pulled pork belly, and roasted pumpkin, may not be your average pizza toppings, but they do make for pizzas of tremendous flavor, never the less.

And, it’s just not the masterfully combined pizza toppings that make PI^LA pizzas unique, it’s also the bread upon which the toppings sit.

With over 30 years of and culinary travels, restaurant openings and fine tuned expertise Chef Fred presents a unique dough at PI^LA of sprouted flour, cured for 72 hours and mixed with Kombu water.

At PI^LA, pizza portions are cut into four-inch squares (Detroit Style), with eclectic pizza toppings, balancing on a signature dough, bordered by a burnt-cheese crust. It’s the combination of Kombu and Sprouted flour that enhances the flavor and promotes the bubbling of the pizza’s unique, crispy crust.

PI^LA – L.A. Style Pizza slices are predetermined and named after classic cars. The pizzas also pay homage to the diversity of Los Angeles.

PI^LA is located just behind the entrance to the Historic Harlem Alley on 4th Street and one might miss the entrance if they weren’t entirely familiar.

Extolled by those who can appreciate the lessor-known hospitality realms of the city often hidden in plain sight, locals enjoy knowing Chef Fred embraces the Speakeasy nature of downtown. It’s one very special hidden pizza gem.

For historians and lovers of jazz, the Harlem Alley finds it’s place in history as the original open stage for jazz musicians in the early 1900s. As our city was barely forming, old time jazz music echoed through the Harlem Alley from 2nd to 7th Streets.

Not only are great chefs enamored by those of considerable fame, they are trailed by the media, food critics, food enthusiasts, fans and top entertainment professionals throughout their careers.

The list of famous chefs he has trained under or collaborated with dates back to 1982. Just after high school graduation up until now, the list includes a lifetime of friendships with such great chefs, Octavio Becerra and Joachim Splichal of Patina Group, Wolfgang Puck, Alain Senderens, and the late great Chef Toribio Prado.

Jonathon Gold and the Los Angeles Times have awarded Chef Fred his just desserts, along with A-list musicians and artists that keep Chef Fred’s eateries on their hot list of daytime and late night destinations.

Visiting PI^LA feels like an art show within a retro diner with its rows of silver vinyl booths, aimed lighting and walls covered with original murals painted by the artist, Shepard Fairey. Fairey also designed the PI^LA  logo and other marketing materials.

It had been almost four years since Clifton’s stopped serving food. The fully restored historic location made through Covid opening its doors again after a two-year closure in early Spring of this year.

Fans may also find PI^LA at Magic Box at the Reef during the Street Art Alive Exhibit at Lume Los Angeles. Www.pila213.com