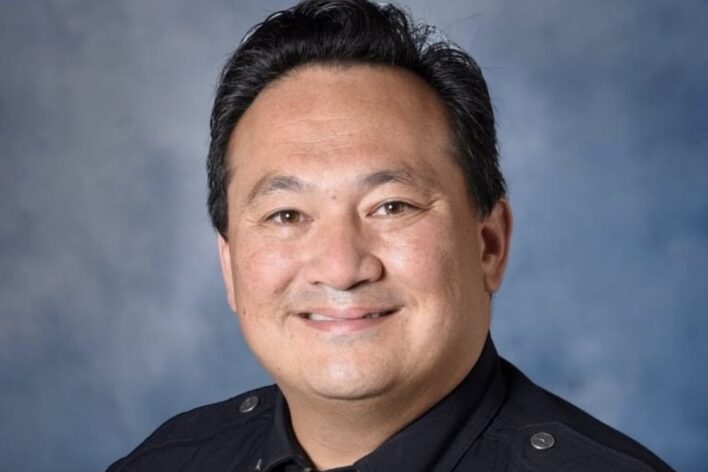 LAPD Chief Michel Moore has announced the upcoming promotion of Commander Donald Graham to the rank of Deputy Chief.

Commander Graham was born in Manhattan, New York, and came to California when he was a teenager. His family moved to the San Fernando Valley in the City of Los Angeles.  After high school, he attended Los Angeles Valley College. In 1992, he was elected President of the Student Union.

He became the president and chief lobbyist for the California Students Association of Community Colleges, representing the nearly quarter-million community college students in the 14 campuses of the Southern California Region.

During his final semester at Los Angeles Valley College, he went to work at the Campus Police Office and discovered a new way to serve his community.

The experience of working around police officers led Commander Graham to join the Los Angeles Police Department in November 1995.

Commander Graham has worked in all four bureaus of the Department and has taken on numerous assignments.

After completing his probation in Pacific Area, he transferred to Devonshire Area, where he worked as a patrol officer and Senior Lead Officer.

Commander Graham had many more accomplishments as a Sergeant in Southeast Area, Sergeant II at Operations-Central Bureau, Office of Operations, and Lieutenant at West Valley Area.  While at West Valley, he served as the area’s Acting Detective Commanding Officer from October 2012 until February 2013.

On October 5, 2014, Commander Graham was promoted to Captain and assumed command of the Central Patrol Division.  At Central Division, he became deeply involved in the growing homeless crisis affecting Los Angeles.

He was part of the architect team that revamped the Safer Cities Initiative (SCI) in Skid Row to the Resources Enhancement Services and Enforcement Team (RESET), creating a template for the City-Wide creation of the Homeless Outreach and Proactive Engagement (HOPE) team.

At HOPE, Commander Graham worked with numerous government and private agencies to stem the tide of violent crime against people experiencing homelessness.

On December 25, 2016, Commander Graham was transferred to North Hollywood Area and promoted to Area Commanding Officer.

During his two and a half years at North Hollywood, he worked with a strong leadership and supervisory team, a supportive community, and strong volunteer corps, as well as a staff of hard-working and dedicated officers who presided over two straight years of crime reduction.

On July 31, 2019, Commander Graham became the first Filipino-American to be sworn in as a Los Angeles Police Commander.  He was appointed by Chief Moore to be the Department’s Homeless Coordinator under the Office of Operations.  Commander Graham is currently the Commander of Transit Services Group.